Autotrophic (self-feeding) organisms are essential for any ecosystem and, whilst several plants of the near shore ecosystem were developed at Contact X, no major forms had been invented for the land. Paul chose the Tiered Seaweed for this purpose and evolved it into a very elegant and aesthetic creation - the "Pagoda Tree."

The Pagoda Tree clearly shows its ancestry and is therefore a good example of what "worldbuilding" should be about - starting with superficial concepts and taking them further. In this way our planet becomes an integrated, multilayered creation, rather than a patchwork of disconnected, superficial ideas. Remember that we only have 10 million years or so fo rapid evolution on land before the enxt big freeze strikes and so most organisms will retain many of their "primitive," aquatic or amphibious characteristics. One of the features of the Tiered Seaweed was that it grew in equal length segments. One might also speculate that it reproduces vegetatively (asexually) by shedding a tier which could then grow independently.

These traits are retained by the Pagoda Trees which grow as a stacked set of equal sized tiers, actively stabilized, as Paul has explained, by a primitive osmotic musculature, rather than by a rigid tissue such as wood. This has the interesting implication that, if a Pagoda forest grows on level ground, the canopy leaves of all the trees will be at the same height, breaking the forest into distinct layers, or "corridors," where only the tree trunks provide obstacles and through which Birch's avians could fly with speed. One could also imagine creatures living in the trees that might have evolved to feed on this traffic with an entrapment device, such as a spider's web, which could be dangled down into the space below.

Paul explains how the morphology of the trees are dictated by low CO2 level and the fact that the leaves are primarily CO2 collectors and do not use light all that efficiently. Light therefore penetrates through seeral tiers quite easily, leaving the forest floor no darker than it is on Earth. However, CO2 is no longer a strongly limiting factor by the middle of the warm spell (High Summer on Epona) and so this could drive further changes, but ones that lag behind because of the contingency and delay inherent in biological evolution. This is particularly true of Pagoda Trees because of their vegetative reproduction. This occurs in the windy season, that is especially pronounced in late Northern Summer: the top tier becomes detached and is capable of being blown, parachute-style several hundred meters. Paul actually tested this idea with this paper model of a Pagoda segment and it works very well.

There are, of course, possible criticisms of Paul's trees. The rationale of their dying back to an underground tuber during an icebound Winter is understandable - but could they really grow back to tree size in just one growing season? The length of year is, after all, only 72% of a terrestrial year. The concept of annual forests, and the migration of forest inhabitants in and out in Spring and Fall, is certainly a fascinating one, but is it realistic? In the middle of Eponan High Summer, the Winters may not be that severe and it might be that Pagoda species in the tropics might become evergreen and perennial.

Other structural criticisms have been posed by Del Cotter, but careful study of Birch's original text is needed to appreciate them. I quote from Cotter's email correspondence:

"The top leaves exert far more force on the base of the tree than the lower leaves when the wind blows, so there is a trade off between getting more leaf surface and saving on trunk size. This is the reason for the decreasing size of sails at each stage up the mast on old sailing ships, and the conical shape of tall thin trees. Note also that the effect of broadening the base is to transfer the maximum bending stresses to the next tier up, making it necessary to broaden that. An exponential taper is the result.

The convex leaves will collect heavy rainfall, so they need a drainage path (see pointy drooping leaves in rain forests). Also they have no way to yield to the wind, as the flag-like leaves of an Earthly tree do. In any case, the cone will invert under its own weight (the string won't stop it) to lie down the trunk like a folded umbrella.

If you want to keep the canopy, you need a way to stiffen it against drooping, and a way to protect it from wind and rain. Radial spines would stiffen the canopy, and the tree could protect itself from foul weather by folding up like an inverted umbrella (this would also be a way to reduce transpiration losses at night). In addition, holes near the apex of the leaf canopy would improve drainage. To arrange for a hollow tube to be also under hydrostatic pressure would be difficult, since the inner space would collapse. To avoid this, webs must connect the inner and outer walls, giving the appearance of a bundle of drinking straws.

The skin will need to be tough to withstand the pressure despite the inevitable damage. Any puncture threatens to split a tubule like a sausage. The tubules should therefore be as small and numerous as possible, to provide redundancy. Alternatively, the outer layers can be kept at low pressure to protect the pressurized interior (this layer can also provide for the transport of water to the canopies by capillar action).

If the wall is thin enough, the tree is in danger of buckling like a hosepipe. Bamboos guard against this by regularly spaced ribs which stiffen the tube against flattening. such ribs can be seen at the apex of the pagoda tree's canopies." 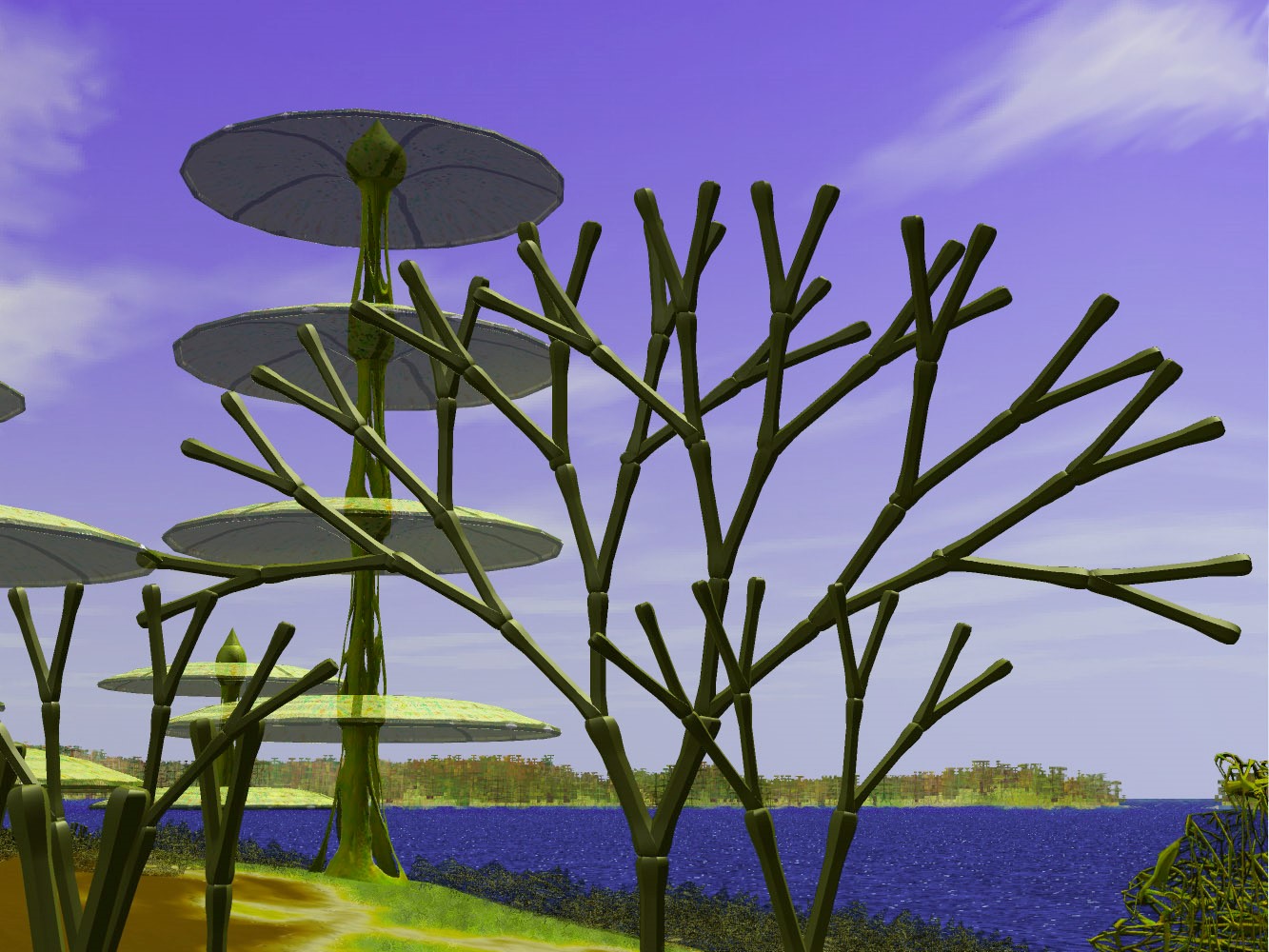 Birch is working on a full reply to Del's reservations, which we will publish in the next Newsletter. Suffice it to say that he claims to have workable and comprehensible answers to the drainage and glopping problems. My own view is that the structural design of the Pagoda Trees can certainly be improved upon, but we only have a short time in evolutionary terms to do it in. Thus, it is not surprising that primitive, maladapted features are retained by a species that not long ago was a marine plant.

One final point that is food for thought: Paul mentions that the primitive osmotic muscles of the plants are distantly related to his extensile muscle/skeleton concept for animals. This suggests that, at the very least, the Phylum containing the Tiered Seaweed and Pagoda Trees, and the Phylum containing Poncedonus et al., are not as distantly related as, say, Chordates and Higher Plants are on Earth. The Animal and Plant Kingdoms on Epona therefore may be more intimately interrelated. The implications of this remain to be explored . . .