The map of Epona shows its geography at a few million years into the planet's 10 million year warm spell. This is a time after which much of the explosive evolution onto the land has happened and we must switch to cultural, rather than evolutionary timescales. Thus, participants at CONTACT X first had to consider what life was like before the land surfaces became habitable -- just what was the stock of flora and fauna available that could make the water‑to‑land transition when the opportunity occurred?

Why we emphasize the map is because the geography of Coti Mundi, over the 10 million year period we are interested in, is quite changeable. This is for two reasons:
1)  powerful new vulcanism is creating the "Highlands" region and
2)  the shallow silt‑filled oceans mean that the polar ice caps are grounded on the sea bottom.

Both of these affect sea‑level and the shape of coastlines because both the creation of new land and the formation of ice caps displaces sea water. Since the gradient of the eroded "Sunken Continent" region is very shallow, coastlines here are especially variable. The team at CONTACT X therefore decided not to play God over the whole planet, but to concentrate their efforts on the biota of the Sunken Continent. (The Highlands therefore are an ideal locale for any of you who want to design some brand new beasties.)  But where to start? Designing anything by committee can often result in a load of talk and little action. A way forward was found when one of the group suggested that we try to design a shoreline ecosystem first, rather than focus in upon any particular creature. This needed outlines for a considerable number of life‑forms, both autotrophic ("plants") and heterotrophic ("animals"). So, everybody was told to shut up for an hour, sit back with a sketch pad and to design something that could be integrated, or "shoehorned" into an ecology.  It worked brilliantly, with no less than 15 different forms being invented. We list their roll of honor here before considering some of the items in more detail: 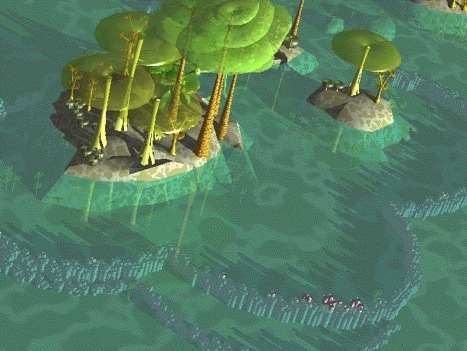 The participants set Act 1 of our drama on the shallow shelving shores of the still barren and icy Sunken Continent. Their ecosystem was made possible by the reef‑building activities of "tube worms." These creatures secrete porous calcareous tubes about their bodies and grow upwards from the bed of the sea. They grow in huge walls, like phalanxes of organ‑pipes, some distance from the shore and, full‑grown, reach close to the surface of the sea. They are very good at adjusting their height to match any change in sea level; it takes a significant shift, especially a drop which exposes them to the air, to kill them off. They are filter feeders, collectively acting as a giant sieve, straining detritus from the calm lagoons, hugging the coast that their presence creates. As Epona has only solar tides, daily tidal fluctuations are very regular and predictable. With the rising tide, fresh, aerated, sea water flows into the lagoons and with the falling tide nutrient‑rich water flows out. It is this outflow that the tube worms feed on, demonstrating the interconnectedness of ecology on Epona, as well as Earth. The tube worms are utterly reliant on the debris of the inshore ecosystem for their food --yet that ecosystem would not exist in the form that it does without the tube worm barriers. 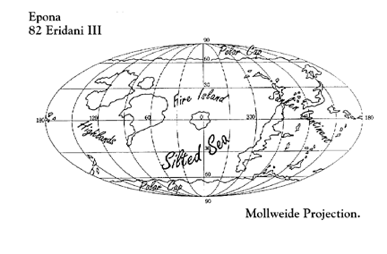 Thus, just before the onset of global warming, the planet's ice caps were double the size shown on the map. The Sunken Continent was uninhabitable and ice‑covered, or bare and, because sea levels were lower, was much more extensive in land area than shown. The Highlands were smaller and just beginning active growth by accumulation of successive lava flows.  Fire Island did not exist at all.

Our first decision was that Epona at this stage has similar global flora and fauna -- all forms either being fully aquatic, avian or amphibious. However, once the land becomes habitable, the dice throwing (contingency) inherent in evolution will likely entail that widely separated land masses will be settled by creatures of a different stock. It was therefore felt that Epona would have two terrestrial bio-geographical regions -- the Sunken Continent and the Highlands/Fire Island. This led to the fascinating prospect that when the sophonts evolving in one region finally were able to explore their whole planet, they would discover another region full of hurriedly‑evolved creatures utterly distinct from the fauna of their own lands since there had never been any previous chance for exchange of species.

The Sunken Continent would be like a vast Americas‑sized archipelago of islands, low‑lying, sediment‑strewn and rich in mineral nutrients and fossil fuels. Migration between these islands would be easy, especially in view of the ever fluctuating sea level. The Highlands would be a harsher place, capricious, volcanic, but still capable of hosting abundant life where weathering has had time to create rich soils from igneous rock. Those words in quotation marks are where forms were named after a earthly counterpart -- this is not to say that they are the same, or even necessarily similar, only that they share some analogy of form or function and that our language compels us to describe alien organisms by alluding to creatures with which we are familiar. As you might suspect from the list, most of these forms are composed of little more than a concept and a sketch. And yet this was sufficient to make a functional ecosystem within which it was possible to focus attention on a lesser subset of inhabitants. The Epona group of Tacoma, WA would like to introduce their existence by suggesting solutions to the Segmented Dragonfly questions. The ugly little beasties caught our imagination and we took to task the justification of their existence. Members prominent in the development process were Susan Sackinger, Philip W. and Jennifer Payne.

Think of the five segments of the Segmented Dragonfly as representing all the stages of it's own development except for the egg stage.  When the eggs first hatch, they're little more than a wiggling tail, and fairly brainless. Their only purpose in life is to attach to a more adult segment. If they cannot, they will starve to death, because they do not have a stomach developed enough to handle non-processed food. If the Dragonfly they attach to already has five segments, the lead segment - or head - will detach and hopefully become attached to another tail baby. Because neither the head nor the tail can fly, they end up in the water. This could be likened - just barely - to the larval stage of butterflies or to the tadpole stage of frogs. The food for both the larva and the adult dragonfly is pond scum. The adult reaches it by dipping into the water or "resting" on the top.

Flight capability was developed to escape enemies. This means there will probably be a fairly high attrition in the larva. To offset this, the reproductive cycle of the adult - and the time in larva stage - is fairly short. Since the neural net is constantly in flux, this means that the overall intelligence of the segmented dragonfly can't improve greatly. The second to the last segment is the "male" stage and the next in line is the female. This was an arbitrary decision, but if anyone can come up with evidence that favors one sex over the other let us know. Each colony produces it's own fertilized eggs and deposits them in the water for maturation. Since the fourth and third segments have only two jobs - mature and reproduce - quite a few egg sacks could be laid.

The second segment from the front really has only one over-riding job: prepare to become the head. Since the head does a lot of work, this is not an easy task. Segment two does most of the major work in processing the food, but three and four can take that process on if necessary. Remember, each stage is just a younger version of the one previous.

The first and final stage of the segmented dragonfly is the head. It is the main information processor. Here is where the core of the neural net is stored. Any decision making is done mostly from here although segment two can make some of the minor decisions. Here, too, is the mouth. Actually, all the segments have mouths, but they are attached to the anus of the segment in front of them. The head masticates the food and processes it through it's intestinal tract. It's processing is very inefficient, so that the waste is still very high in nutritional value. This has two effects. First, it allows nutrition to reach even the tail segment. Second, in larval form, it jumps up the nutrition going to the tail by a factor of 4 and thus jump starts the maturation process. The tail takes much less time to become capable of flying and thus escape their enemies.

If, for some reason the head should become detached early from the mature colony, the remaining segments should be able to take over.  They may have diminished capacity, but they should be viable. This gives the dragonfly an added advantage of being a bit harder to kill. Damage to the first in line will not kill the colony; nor will damage to any but the first. The only way to kill off the colony is to damage both the first and second segments, and - depending on where they are in their cycle - possibly the third! Surely such indestructibility is an evolutionary advantage.